I have enjoyed a student on some weekends lately who wants very much to begin at a novice running level.  We were working at maintaining lines, under good control, as much because her dog had to get the hang of holding lines as she did. She was successful eventually. In retrospect, I believe she was disappointed in its apparent irrelevance to running in a trial.  It was anything but irrelevant.  All building blocks of running sheepdogs are formed at the line level.  Until you and your dog are good at it, there is no real point in stretching things out.  And what’s more, occasionally even well-schooled dogs can benefit from reverting to line work at hand, as a reminder of pace discipline and handler/dog expectations.

The lines can be in any particular direction as long as they are committed—no lollygagging around changing your mind about the direction of them. No winding back and forth. Sheep straight. If you have started a line, stay with it.  Don’t change it because the dog decided to.  Give the line all your focus and attention. The dog will get the hang of it. You will find they will begin helping you hold a line. Sometimes mine will drive away sheep in a perfect line, without my saying a thing. 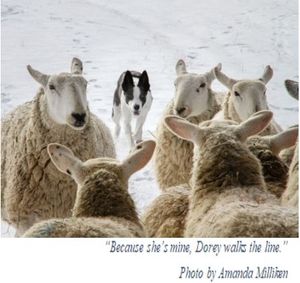 The line holding is fertile territory for the refinements of language that will help in more sophisticated running. My student, for instance was making every command a big “Come Bye” or “Away”. When a small flank is the right answer, the handler has to differentiate linguistically, reducing the small flank to “come”, or “Way”, delivered with less emphasis.  The clever collie will note the wisdom of the small flank, growing in admiration for the whims of his handler. The language will come to affirm his line holding ideas, almost more than it is commands. Have a correction for straying too far in a flank, unsolicited. Keep the dog in behind honouring the line, until you make a distinct turn, where the bigger flank can be used, in contrast to your small flank, for the line holding. Your young dog learns to expect a big flank at the onset of the serious turn in the line.  Suddenly you create a dog that makes good turns at trials and a handler that hugs him/herself when they walk off. The verbal commands, being shortened and lengthened, is a precursor to the same with your whistles, with whistles being more concise.  The half flank whistle gives you a small step to the left with the bigger whistle indicating a deep big flank. The difference in the two will bring finesse to your running. We are all looking for it.

The exercise is enhanced by good reactive sheep, that demand a flank be finished off to make a turn.  For instance, many of the katahdin types we see in trials would be unhelpful, as they turn before the dog has done anything constructive insofar as taking the extra few feet to cover the line is concerned.  Good sheep are all part of the making of your dog. I was scanning my dozen doggers yesterday and thought I detected a message “We’ll make dogs out of those mutts yet.”  The dog learning to take good charge of the sheep is the goal, and for the handler and the dog, to learn one another’s speak about it.

I hear comments of surprise that my dogs are so willing to take small flanks early on. A few things explain it. They are intelligent. I cash in on every bend in the sheep to give a corresponding flank, big or small. Each turn the sheep take is a training opportunity. The dogs come to like the order of the lines. Controlling sheep in this way gratifies them. They are proud of what they do.  Happy dogs are easy to train.