Legends of the Field

We can all name legendary dogs of the past. Many will be in our own dogs’ pedigrees. We might even muse, fondly, on certain traits that one or another of our own dogs exhibits, traits that we feel reflect the prowess of his forbears. Is he a great outrunner? A brilliant shedder? Biddable, kind to his stock, handsome, clever, quick? Are any or all of these traits necessarily one of the components of a great dog, a legend, one that will be remembered with reverence and awe years from today?

I set out to find out. I posted to North American and UK stock dog lists. I spoke to friends, fellow handlers and mentors, mid-level and nationally ranked handlers. I reflected. I procrastinated. And, finally, at the 11th hour, I sat down to write. This was the result.

I began by trying to define the term “great”. Not good. Not very good. Great. A legend. What traits or constellation of traits are required? Could some be missing and not be missed? Is there at least one overriding characteristic that is essential? Is it, perhaps, not a question of lists at all?

Some of the replies that I liked are listed below. Taking these replies and others, thinking them over and weighing them in my mind, I began to form some conclusions of my own. It seemed pretty clear that a great dog was necessarily the product of a partnership between dog and handler, that, to quote Gwyn Jones, “neither are anything without the other”. Does that mean that there might be some very good dogs out there in the ‘wrong’ hands, dogs that might be great if handled by another? I think that must be the case - although we might never see or know of them. It does NOT mean, however, at least in my mind, that a top handler can MAKE a dog great. There must be something pretty special in the dog to start with. Certainly, a top handler can take a reasonably good dog and win a few, even more than a few trials with it, and still have a dog that is no better than fair or pretty good. Nor will that same top handler be deluded as to that particular dog's worth. I once asked Alasdair MacRae about a dog with which he was Reserve Supreme International Champion, a dog that I had discovered was related to the top side of my own first dog. His answer? (again I paraphrase) “Ach, he was no good. A terrible animal. “ Remarkable, no?

Once I got over my surprise, I came to admire his dispassionate assessment of this dog. Nor is he alone. Most of the top handlers will have a similarly clear-eyed perspective on their own dogs, their competitor’s dogs, even your dog, should you be brave enough to ask. Nor, remarkably, will they regard their assessment as either a personal insult or a personal compliment. It's about the dog, not about you!

So, what is a great partnership? To me it is an almost uncanny ability of dog and handler to think as one, to act as one, to anticipate each other's desires and intent, to work as a single unit with a single purpose. In this category, the team most often mentioned were Bill Berhow and Nick. Another, my pick? Alasdair MacRae and Nan.

Another necessity for greatness? Consistency, the ability to shine on different sheep, in different circumstances. A consistent winner at big trials. In the North American context, I take this to mean the larger and better attended double lift trials: Meeker, Soldier Hollow, the Bluegrass, Grass Creek, Bloomfield, one or two others out west. East and West. Undogged range Rambouillets, Wapoos Island cross-breds, milk sheep, hair sheep, Suffolks and Texels, Cheviots and St Croix, everything in between. Sheep that are a challenge to keep on the field; sheep that require a score in the high 90s to place.

Any dogs you know that fit the bill? My personal pick in this category Bev Lambert and Pippa.

Another essential trait: authority over sheep. A great dog must take charge of sheep, relax them, control and direct them with the minimum of fuss. Baa Ram Ewe, you know? Berhow’s Nick comes to mind. Many named him as a great.  Sheep liked him. Strangely, it is also said that he was a dog that gave the impression, almost, of indifference, of casualness, of hardly paying attention. Yet his sheep would go precisely where they were directed, in good order and without stress. Magic.

In the same category, it is said, was Aled Owen’s Roy. “Tremendous authority over sheep. Consistently with different types of sheep, he could, within so many yards from the top end of a field, get a hold of sheep and make them workable.” (Gwyn Jones and Sue Main).  Also: Serge Van der Sweep's Roy: “Capable of making bad sheep into winning controllable ones” (Gwyn and Sue again.) And finally, John Thomas's Don: “I saw him towards the end of his trialling career and I remember at Longleat Trials he put in a run that I couldn't fault... he was a very consistent performer and one of the most respected dogs of his day.” (Eamon Lawless)

What else? Power, certainly, or at least enough power. That elusive, highly desirable quality that is perhaps the one essential for any useful dog. No one wants a dog that can be run off the field or stall out on course. Clearly, no great dog, of necessity, will be without it. Enough power to handle heavy, or awkward, or aggressive sheep, move ewes and lambs, bring sheep in a snowstorm. We may endlessly debate an exact definition, but regardless, “we know it when we see it” to paraphrase the US Supreme Court (struggling with the definition of pornography).

Examples? Bobby Henderson’s Sweep, a dog that “…could handle heavy sheep and could use his power to shift them in front of him.” (Gwyn and Sue again).

Going on: Some of my correspondents mentioned method, a term heretofore unfamiliar to me in this context. So, what is method? Here's one definition: “It is the HOW part, not that the dog maintains straight lines, but HOW he maintains them. It is the softness/hardness firmness of the lift etc. It is an undefinable property that may be subtle but makes a run breathtaking. It is the manner in which the sheep are controlled -- and the emphasis is on the dog doing the work, NOT the handler commanding all over the place.”

A dog with method? Bobby Dalziel’s Wisp. “The dog had quality, method, class and power. He had the ability to take sheep around a field without any stops -- just tucked in behind them and took them.” (Gwyn and Sue)

Also mentioned by Gwyn and Sue, but apparently not a particularly important trait in North American eyes, is that a dog, in order to be great, needs to be a good listener, especially at a distance. One can speculate on why the discrepancy, but no doubt the size of the courses and the difficulty of the terrain at the big UK trials would put this high on a UK handler's list. Both Bobby Henderson’s Sweep and Stuart Davidson’s Star were described as being good listeners. Star, in particular, was described as having tremendous listening ability at great distances. Shone at a distance in Ireland in 2002.” (Gwyn and Sue again)

And now we come to heart. At the top of many lists. Courage. Try. Determination. The will and desire to succeed. No dog, however strong, however talented, however well trained or run, however well bred, can succeed without heart.

Dogs with heart: Alasdair’s Nan, who in his own words, roughly “might not have been the strongest dog in the world but she had tremendous heart.” But let's not take Alasdair's word for it. In the words of another National winner, spoken to Alasdair after watching their winning run in Virginia: “I always knew that Nan was a very good dog, but today, she just proved that she was a great one.” (again paraphrased by me.)

And what of breeding ability? Surely there are many good reasons to include it as an essential trait. Not all felt that this was an essential requirement for greatness, but many did. Some pointed out that we spend a lot less time on breeding decisions and, in general, know a lot less about the dogs, their progeny and close relatives and how they work over here, and that breeding decisions are too often made on the basis of convenience. “A stud will be put to an ordinary bitch, or two dogs will be bred because there is only an hour travel time, or they happen to be at the same trial at the perfect time.” (Marilyn Terpstra)

So, is it fair to include that as a trait? This from Carol Campion: “I think we in this country have the handicap of distance and size of the country as well as the limitation of judgment by not having work the scope of the folks overseas. Overseas, they could see the dogs working on the hills, in the barns, at the trials and in the pubs. And folks live close enough and the community is close knit enough that not much remains hidden. A dog's flaws will get talked about a lot quicker than here, where often our only way to judge is by who won what trial.”

So, there you have it. A capsule description of a great dog and a summary of the input I gleaned with from various sources.

“The answer you get in the UK will be a lot different from the answer you'll get here. “ (Scott Glen, me paraphrasing.)

“It has to be a partnership… dog and handler as neither are anything without the other.” (Gwyn Jones and Sue Main.)

“Undoubtably, many, many dogs show greatness in difficult real work situations, but most times others don't get to see this.” (Denise Wall again)

“Seems to me that what separates a great one from a very good, or just good one is their thinking abilities…the great ones will see what you need done, often before you know what you need done, and get it done, no muss, no fuss, with little or no input from the handler.” (Anna Guthrie)

“If I was to come up with a list in my head I'm afraid it might get kind of big, but the core of it always comes back to the heart for me.”  (Laura Hicks) 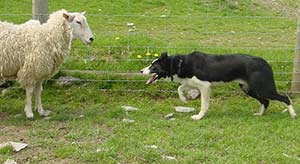